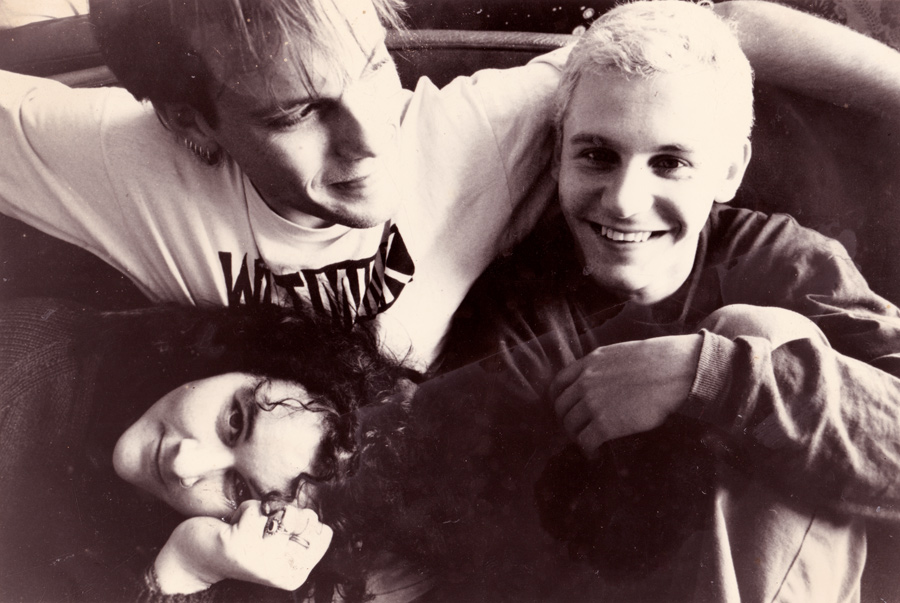 We’re thrilled to announce that we’re going to play some gigs around the country this year.

The Early Years Tour: Playing songs from Flour, Burn Out Your Name, Fill Yourself With Music and Kitten Licks.

Poison City Records is extremely honoured to be teaming up with seminal indie-rock darlings, Screamfeeder to re-issue the band’s entire album discography on vinyl over two years.

To celebrate this year’s issue of their four classic 90s albums, the band will undertake a short national tour this spring, focusing on songs from their spiky, immediate debut Flour, the crushing, seminal Burn Out Your Name, 1995’s oddball indie rollercoaster Fill Yourself With Music and the 1996 smash Kitten Licks.

Chief songwriters Tim Steward and Kellie Lloyd will also perform side shows in each city, digging deep through Screamfeeder’s back catalogue as well as highlighting their more recent work.

We’re also doing some Tim and Kellie acoustic shows alongside the main tour in October (and a Brisbane one in August). These are fun, we sit side by side and go song-for-song. We play ‘feeder stuff as well as songs from our more recent projects.

So this is happening. Exciting times – thought you’d never have Screamfeeder between The Screaming Jets and The Screaming Trees (OK, that’s not exactly right) on your Record Rack? Think again!

Poison City is extremely honoured to be teaming up with seminal indie-rock darlings, Screamfeeder to re-issue the band’s entire album discography on vinyl.

The project will run over 2 years, with a chronological release schedule of the band’s 6 studio albums as well as 1999’s covers EP Home Age. The records will be re-mastered and released in limited edition runs of colour and black vinyl (one pressing only for each album). From next week Poison City will be offering special priced pre-order packs, containing multiple albums and a small selection of long out-of-print Screamfeeder t-shirt designs.

Nine years after their last CD release (2005’s Delusions Of Grandchildren) the band have amassed an ongoing swathe of independent releases including a 40 song B-Sides collection, and 7 live albums. With the reception to these releases running hot, and a return to the stage for a brief tour with The Breeders in 2013, we’re overjoyed that these albums will finally be available on vinyl for the very first time! (or in the case of ‘Burn Out Your Name’ – again).

“My first introduction to Screamfeeder had nothing to do with their music. One day around 1994, I arrived at my local high school, embarrassingly forgetting it was a casual dress day. A friend (who had recently introduced me to Magic Dirt, The Meanies and the world of Au Go Go Records) passed me one of his old tees to throw on for the day.

On that smoke stained, well worn t-shirt was the band name “Screamfeeder’. I hadn’t heard their music at that stage, but the name struck a chord with me. It wasn’t until our next family trip to Geelong, I was able to stop at the local record store (Chaos Records) to buy the “Fingers & Toes’ single and went about playing that thing to death over the next few months. Soon after I tracked down copies of “Flour’ and “Burn Out Your Name’.

A year or so later, I moved out of home and into the murky world of mid-90’s Geelong rock. My first good friend among that Geelong scene also happened to be a Screamfeeder fan and we regularly skipped uni, hung out at the beach in Torquay and drank our way through many a house party, with “Burn Out Your Name’ and “Kitten Licks’ a crucial part of our daily soundtrack. I guess everyone has a few of those bands that draw you back to a time and a place, songs that you never tire of and albums that still light a spark many years on.

For me, Screamfeeder is one of those bands – angsty, gritty and quirky enough, but always with those great pop hooks and perfectly off-kilter melodies. It’s a total buzz to be working with Screamfeeder on these vinyl re-issues all these years down the track. I hope by giving these albums the vinyl treatment they deserve, we reignite a certain nostalgia among the band’s older fans.

Shit, if we’re lucky, we might even introduce some new people to one of Australia’s underground indie-rock treasures.” – Andy (Poison City Records)

LP versions of Screamfeeder’s debut ‘Flour’ and the seminal ‘Burn Out Your Name’ are due out May 2014, followed later in the year by ‘Fill Yourself With Music’ and the band’s 1996 classic ‘Kitten Licks’ . The band plan to perform selective gigs to celebrate the albums’ reappearance.

In an era of brightly coloured teen pop, your ears are going to be sizzling with the sounds of some true heavyweight 90s Aussie indie-rock.

Or buy from record shops: 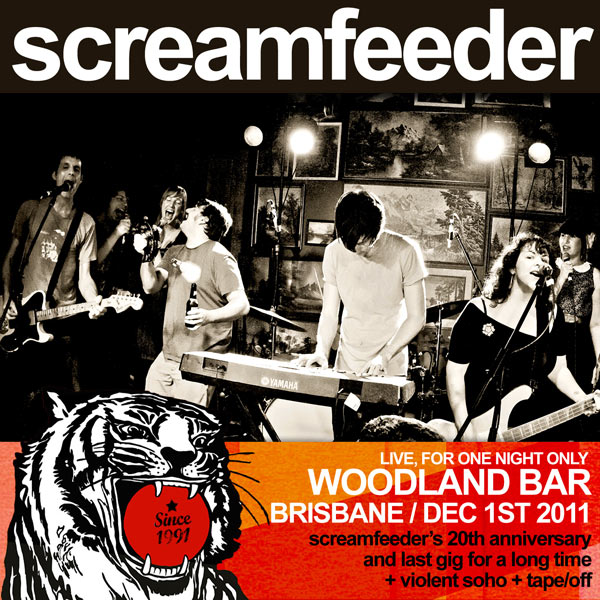 We’ve been working hard mixing and mastering some live sets. They’re available at our bandcamp for free (or name your price). This is the big one, a 24 song set from our 2011 “break up gig” (yeah right!) at Brisbane’s Woodland.

In late 2011 Dean announced he was going to live in England indefinitely. We decided it was important to play a last big hometown show with him, seeing as it was also 20 years since the band started. ..It was all a bit of a whirlwind but in typical Screamfeeder style it all came crashing chaotically together on the night…

..There are a hell of a lot of mistakes in the performance. We left them in. Technical perfection wasn’t the aim of the night.. Hopefully we made up for it by harnessing the energy and spirit of what the three of us are about as a band, as music fans and as people. read more..