Poison City Records are proud to announce the vinyl re-release of Rocks On The Soul – on November 25th, the fifth instalment in their Screamfeeder re-issue series which started in 2014.

“Whether you want the depravity of the post-punk noise, the sweetness of a soothing pop song, or something in between, on Rocks on the Soul they deliver. I’ll give this an A-“. (In Music We Trust)

But by 1999 Screamfeeder found themselves backed into a corner by their American record label at the time, being legally prevented from recording a follow-up album to their 1996 smash Kitten Licks. The covers EP Home Age had filled the gap, but the band were sitting on an ever-increasing pile of diverse new songs. In the end, they found a way to opt out of the disastrous contract and arrangements were promptly made for a recording session in the winter of 2000.

The studio and producers were an odd choice, a discreet office location in Melbourne’s South Yarra owned by electronic duo The Pound System. It turned out to be perfect – Woody and The Rev could hear new potential for the band’s trademark male-female vocal interplay, sweet yet bruising guitar lines and never-sitting-still song structures. Together the team proceeded to deconstruct Screamfeeder’s approach while exploring the possibilities offered by the then- new Pro Tools digital recording platform.

It was a bold move; it would have been too easy to make ‘Kitten Licks II’, but instead the band turned a sharp corner and produced a quite-unexpected album. The songs are sprawling and hyper-melodic, layered, edited and experimented with. Vocals are lush and the melodies emphasised, drum beats are looped and hypnotic. This was the sound of a band confident enough with their songs that it didn’t matter the sonic tangents they took off on.

“…At the time, it sounded like it was too good for a band from Brisbane, which is never true — of anywhere — but that’s how Screamfeeder made me feel. I was excited by it. It was probably the last time I felt truly shocked by what a Brisbane band was capable of. Now everyone knows.” (Ian Rogers)

The album alienated some of the more change-resistant fan base, while engaging with a whole new one, who were captivated by Kellie’s epic Stopless, or the quasi space-age Above The Dove. Tim came up with the album title, a play on The Isley Bros ‘60s LP Soul on the Rocks.  Dean explored the local area and added his field recordings to some of the songs, notably If You Lived Here.

Finally released in October 2000 through Shock Records, the album was a masterful return to form, showcasing a set of songs that quite clearly raised the bar, from the first notes of masterpiece Stopless to the emotive closer, Close Again. If there’d been any doubt about the band’s ability to survive the industry travails, Rocks On The Soul proved them all wrong.

And here we are in 2015. Exactly 15 years later and Rocks On The Soul remains a pre-shoegaze-comeback gem. The songs and ideas are at once confident and assured, but never cocky, with Screamfeeder’s naiveté and wide-eyed wonder and love of the music they were creating shining through. 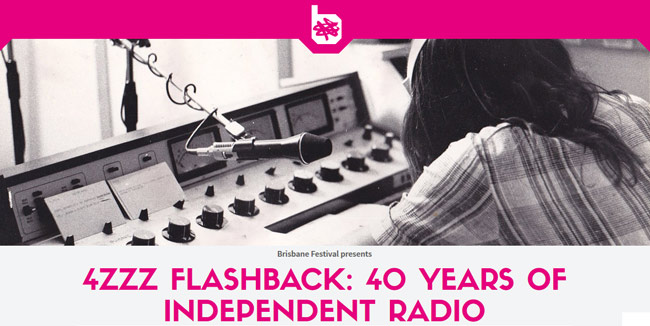 This one will be pretty great. Part of the Brisbane festival, it’s in The Spiegeltent on Southbank, there’s a bunch of mega reputable bands all rocking out on a Sunday afternoon..

To celebrate the 40th birthday of Australia’s first community FM broadcaster, we’ve pulled together a showcase of seminal acts that have been integral to Brisbane’s music scene over the last four decades, including Jeremy Neale, Screamfeeder, Ups and Downs and Ed Kuepper. 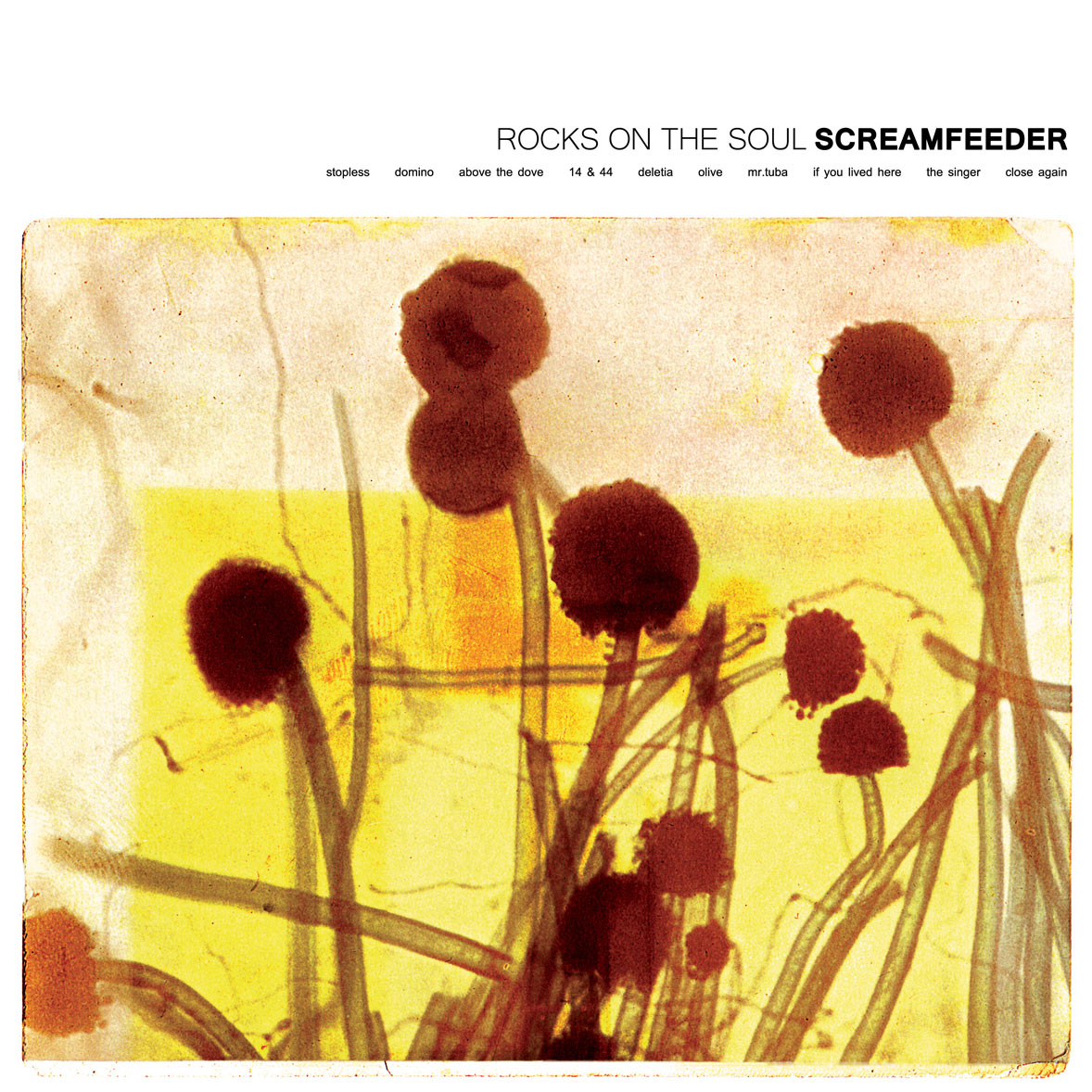 OK the cat’s now out of the bag. We’re writing new songs. And we’re going into the studio in early September to record the first 2 or 3 of them. These will be released in October, in time for our TOUR IN NOVEMBER to celebrate the ROCKS ON THE SOUL re-issue on glorious vinyl through the illustrious Poison City Records.

That’s pretty good huh? Is that enough for you? Our first new stuff in 10 years.. Rocks back after 15 (!) and sounding better than ever. I know, it’s nuts, we walk into the practice room and it feels like yesterday.

Pretty much every band in the world is re forming right now, and why the hell not, being in a band is better than: having a job, having kids, buying a house, or deciding “the band isn’t doing it for me any more dude, I need to branch out and discover myself”. No, these things will come and go, band-life is forever.

So yeah, exciting! We’re back, bro. Pass the word, pass the dutchie, get your hi-5’n hands up and ready.

To celebrate the general awesomeness of vinyl, we’re chopping back the price on the 4 pack of vinyl releases from last year. $80.00 for the lot, plus we’re offering free postage (ie we will get in the car and deliver them) to inner-west Brisbane. Check it here. 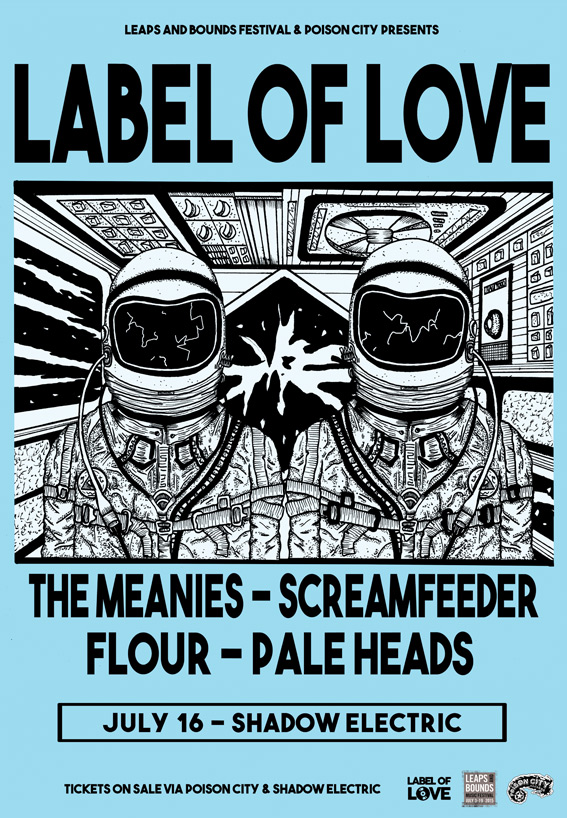 As part of the annual Leaps and Bounds festival, we’re playing at LABEL OF LOVE, a POISON CITY RECORDS showcase, it’s gonna be super rad. See you in Melbourne~!

Born in the spare bedroom of a dingy share-house over a decade ago, Poison City has grown from a weekend hobby to one of Australia’s most prolific and well respected independent labels. Home to the likes of The Smith Street Band, Harmony, Clowns, Batpiss, The Bennies, Deep Heat and Mere Women, Poison City is as much of a music community as a label or record store; presenting tours, local shows and their annual Weekender Fest.

In celebration of the Leaps & Bounds festival’s ‘Label Of Love’ series of shows at Shadow Electric, Poison City has bought together two classics of the Australian underground, Melbourne’s buzz-saw punk legends THE MEANIES and Brisbane’s indie-rock darlings SCREAMFEEDER for one special night! They’ll be joined by scuzz-rockers FLOUR and noise-rock all stars PALE HEADS (members of The Nation Blue / Batpiss/ ex.The Drones).