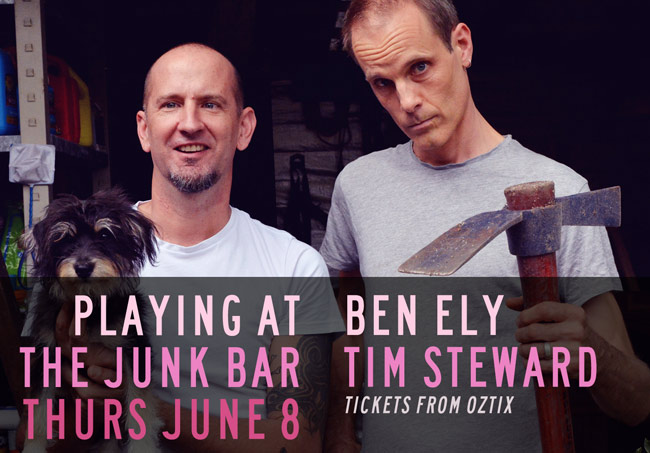 You know Tim and Ben, you’ve seen them round town.. in New Farm Park, on the Big Day Out main stage, in the cheese aisle at Ashgrove Woollies, or selling t shirts at The Zoo. These two have been representing Brisbane around the country and around the world in their bands Regurgitator and Screamfeeder for years, and now just for the fun of it they’re going to quieten things down a bit and join forces on the Inner West’s smallest stage.

THE SKUKUM LOUNGE @THE JUNK BAR HOSTS BEN ELY AND TIM STEWARD SOLO SETS,  AND TOGETHER.

“..Goodbye Machine is too good to deny ..This departure from previous sounds is instantly rich and engaging and one we can only hope he follows up..” themusic.com.au

“Despite the change of pace, Goodbye Machine proves Ely is as adept at playing soft and subtle as he is doing loud and abrasive..” Daniel Johnson

Tim was awarded the Grant McLennan fellowship and spent the European summer of 2016 in London on his own private songwriting camp. He returned to Australia and has recently re-banded together with Screamfeeder to record and release their 7th album Pop Guilt, containing many of his London songs.

“Thankfully Brisbane’s Screamfeeder have never been very good at breaking up, and 25 years after their debut, Flour, they’re still writing career-best songs. Screamfeeder pour a lifetime of indie-rock experience into this collection of blissed-out punk songs.” Rolling Stone

Come and hear for yourself what happens when 2 guys who grew up on punk step out of their comfort zone and come a little closer to the essence of their songwriting styles.

The album is well and truly out! Thanks everyone for so much help and encouragement getting this one together..

Some great reviews coming in already:

25 years into their career, Screamfeeder are still killing it. Thankfully Brisbane’s Screamfeeder have never been very good at breaking up, and 25 years after their debut, Flour, they’re still writing career-best songs. Screamfeeder pour a lifetime of indie-rock experience into this collection of blissed-out punk songs. They may not have achieved the chart success of fellow Brisbaneites Regurgitator, Powderfinger or Custard, but their records have held up better than those of their peers. Pop Guilt is big, brash and shiny guitar music that will take you back to the Nineties. Think Hüsker Dü and the Go Betweens smashing heads with the Pixies and Dinosaur Jr and you’d be in the right ballpark. Matt Coyte, Rolling Stone May 2017

Twelve years since Screamfeeder’s sixth album Take You Apart, this long underrated Brisbane band have slowly reintroduced themselves to audiences through a series of reissues of their first five records, followed by three new singles. Those earlier albums have stood up well and Pop Guilt keeps them excellent company. Singer/guitarist Tim Steward has kept himself busy with his other outfit We All Want To, and some of that band’s charm has rubbed off here: he’s in fine voice on the fizzy rush of Got A Feeling and the chugging drone of Falling. Bass player Kellie Lloyd has a more prominent role than before, taking the lead on five of the album’s 12 tracks, including the first two singles Alone In A Crowd and All Over It Again, and the addictive Shelter. The band’s reference points are worn loud and proud – the twists and turns of Alone In A Crowd have an unmistakable Pixies crunch; Sonic Souvenirs recalls early Sebadoh, and the shadows of Swervedriver and Hüsker Dü hover throughout. But Screamfeeder are peers of those bands, not pale imitators  ..there’s no guilt here, only pleasure. Andrew Stafford, The Age / Sydney Morning Herald, 27 April 2017

Here’s our clip f0r the album-opener HALF LIES.

See you at the gigs over the next few weeks..

To be released on April 21 on ABC / Four Four in Australia, and in America and Europe in June through Rogue Wave Records, a brand new imprint of Ripple Music.

You can hear the whole thing on our bandcamp.

And pre-order on itunes and via your fave retailer here now.

Our 7th proper studio album, and the one released after the longest break we’ve ever had.

10 brand new tunes from us, as well as last year’s 3 singles, All Over It Again, Alone In A Crowd and Karen Trust Me.

We recorded the album at The Shed, in Brisbane, late 2016, with Darek Mudge as chief engineer. We then divided up the songs between 5 mix engineers to get some diversity in sounds and styles..

Band and front cover photography by the awesome Stephen Booth.

We’re going on tour to celebrate. Details and ticketing:

The PledgeMusic “project” has been amazing, thanks to everyone who has pre-ordered the album, you’ve all helped move it along and actually turn it into reality!

The album is currently about to be mastered and we are getting the artwork together this week. We have a title already – thanks to everyone who let us know what they thought of our art and title ideas on the PledgeMusic site, that was cool.. we have gone with some of your suggestions – not all (obviously..). We will have news regarding the release date, the track listing, art and title within 1 week from now.

If you’ve already pre-ordered vinyl or any of the special deals, your name will be on the artwork! If you haven’t ordered, and your name on the art is kinda important to you, get in quick, we will be sending the vinyl artwork off in the next few days,. and the CD artwork shortly after that. Anyone who pre-orders after that, sorry but it will be too late to put your name on the cover. We still love you and all, but – you know.. deadlines.

The time to hesitate is through, visit: Screamfeeder at PledgeMusic.com

If you happen to live around the horizontal mid point of Australia, don’t miss us at the following beach-side haunts in Feb- March! 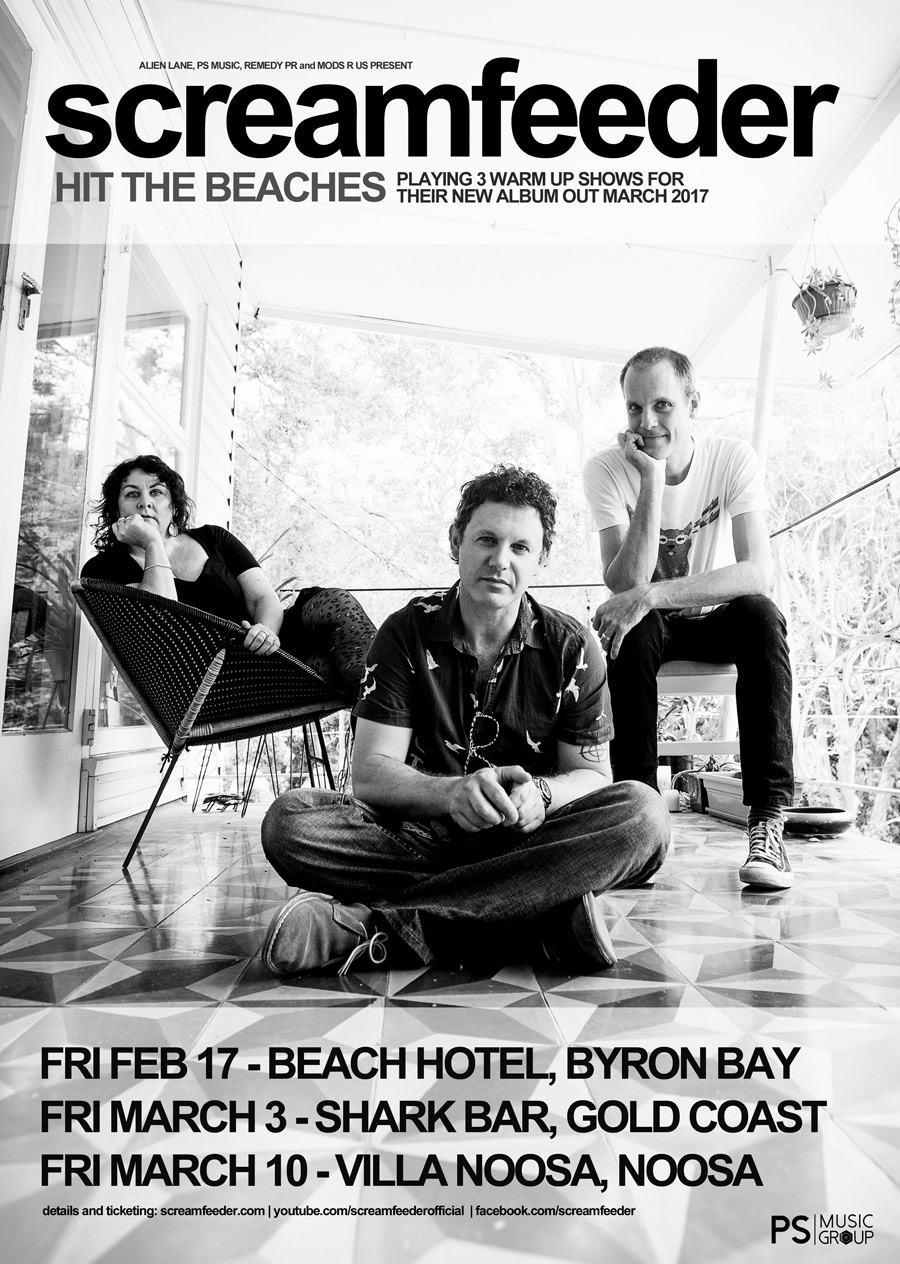